Duke has always made it clear she’s not his type.

Yet the simmering tension between them says otherwise….

No one says no to fiery but talented home designer Neve Harper—which is how she convinces her elusive neighbor, Duke Kennicot, to help out with her latest renovation job. Not only is Duke a design aficionado, he’s got the inside scoop on the cabin’s owner. And since Neve’s ulterior motive is a romance with the boss, Duke is her ideal wingman. Except from the moment they’re alone in the remote Ozark mountain location, Neve discovers Duke is just as headstrong—and a whole lot sexier—than she ever realized. Duke has always made it clear she’s not his type. Yet the simmering tension between them says otherwise….

Duke had been warned to steer clear of hot-tempered Neve, but his resolve is lessening with every heated exchange—and every smoldering touch. By the time Neve unearths a dangerous, age-old mystery buried on the property, Duke is ready to do just about anything to keep the brazen beauty safe….

Duke waited until Angel Face shuffled into the elevator before rapping his knuckles across Neve’s door. He avoided men around Neve at all costs. Being gay was harder than he’d thought it would be. Was Angel Face superhot? Should he make a smutty comment or smile coyly at his butt as he walked past?

I need gay lessons. Hell of a thing to come to terms with, especially after two years of pulling it off.

Pajama-clad and curled into a ball on her ultrachic sofa, a beige monstrosity set square in the center of the high-ceilinged room atop a thick white rug, Neve didn’t pause in shoving yogurt-covered pretzels down her gullet to bother with a greeting. The scenery didn’t differ—sofa, pajamas, snacks, bad television—but she seemed more subdued than usual.

He sat next to her and snatched the remote from the coffee table. “Just because you renovate and design for a living doesn’t mean there aren’t channels besides HGTV. Why can’t I live next door to a chef? Or a chiropractor. Someone useful.”

“I’m assuming it’s because you were a real asshole in a previous life.”

“Can we watch Survivor, maybe try a movie once in a while?” He swept a lock of his hair over his shoulder and grinned as Neve rolled her eyes.

She’d never hidden her envious love of his hair. “Do you do that on purpose? Play with your hair and wear tight black jeans and T-shirts to torture straight females?” She turned her attention to the flipping channels on the television. “Because I would.”

“That’s me. Brutal.” Normally, she made proclamations like that with a little more pride.

Duke chewed his lip and looked her over. She had her glossy, coffeecolored hair pulled into a rakish bun on the top of her head, wore her favorite plush robe over plaid pajamas, and one hand steadily ferried pretzels from the bag to her face.

Pretzel crumbs and all, he’d still get hard if he stared too long. Neve joked about converting him, but if she ever made an honest effort, he wouldn’t hesitate to wrap her killer legs around his waist like a bow, wind a lock of her silken hair through his fist, and make good on every vulgar fantasy he’d concocted over the last two years.

Duke shifted to find a more comfortable position in his awkwardly tight jeans, jeans growing tighter with each vivid image popping into his cranium—Neve on her back with her hair fanned out like a dark halo, Neve’s haughty mouth humbled by a moan of ecstasy, his palms on the inside of her thighs, spreading— Jesus Christ, man. I need to get laid. 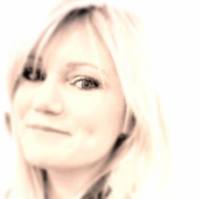 A Florida native, Roxanne Smith has called everywhere from Houston to Cheyenne home. Currently residing in Roswell, New Mexico, she’s an avid reader of every genre, a cat lover, pit bull advocate, and semi-geek. She loves video games, Doctor Who, and her dashing husband. Her two kids are the light of her life and provide ample material for her writing.

One thought on “To The Studs Blog Tour + Giveaway”