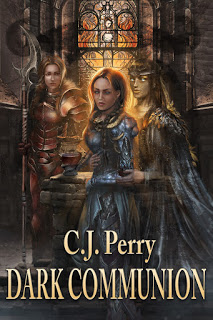 A cursed line of Minotaurs has kept Ayla’s people enslaved for 200 years. With nothing left to live for and a death sentence in her womb, Ayla trades her soul to a dark goddess for a chance to break the curse that keeps her people in chains. Armed with only her faith, Ayla and her brethren lead a revolution against an army of half-beasts led by the immortal son of the Goddess Herself.

The minotaur caught up to Deetra and pushed her down into the sand. Deetra rolled away, but he stood over her, menacing and taunting her. She kicked out at his crotch but missed.

Alex pried Ayla’s hands off the gate and held them. “You can’t save her! We have to go, now!”

Ayla snatched her hands away from him. Deetra screamed from the arena floor and the crowd cheered. Ayla turned to look but Alex grabbed her again, by the shoulders.

“We have time to run, but only if we leave now!”

“Get off of me!” Ayla slapped Alex in the mouth. He recoiled and held a hand where she hit him. Ayla pushed him by the chest and accused the other men in the ready room with her eyes.

Butch pushed between the others and shoved Alex out of the way.

“You heard the Priestess.”

Ayla eyed him as he bent at the knees. He gripped the bottom bar of the portcullis and rolled his shoulders to ready himself.

“My people are still loyal to the Night Goddess.”

The other men lined up on either side of him.

Ayla gave Alex a stern look. “Are mine?”

He shook his head, defeated, and took his place next to Butch. “We’re gonna die.”

This was my first story by this author and I was surprised on how well I really enjoyed reading this book. The cover was what really drew me to this book as well as the blurb. Just say I was very surprised.

The characters were really well developed. Alya was my favorite character and she will take you on a path that you will not image. A lot of twist and turns which makes it a great story. This was a easy turn pager for me that I fell in love with.

I hope you check it out. This story will take you on an adventure.

My deep and abiding love of fantasy began when I was six when I first saw the 1981 film Dragonslayer on VHS with my father. He loved fantasy movies too, but didn’t have the courage to be a dork about it like I did. That movie was a gateway drug that led me straight to the hard stuff – CS Lewis. I was far too young for such potency but by the time I was ten I had read the whole series. That’s when I found my first Dungeons and Dragons group. When I started playing, my friends and I used pre-made campaign settings and published adventures, but I quickly grew restless with their limitations and trite story lines. I needed my own persistent world: something adaptable to my whim and that no one else owned.

Back in my day, there was no internet, so I took out every book about castles and medieval history from the school library and read them in Math class (I’m still terrible at math as a result). I came up with an entire world and brand new history. I read books on cartography and hand drew maps of my new world. I created a cosmology, a hierarchy of gods, and the tenets of their religions. I read the Dungeon Master’s guide a dozen times, and every fantasy novel I could get my hands on.

Then, one day, I sat down and told my friends, “Hey guys, wanna try my story instead?”

Even 15 years after the original D&D campaigns ended, former players tell me that they share our incredible stories with their children. I’m honored to say that most of those players still have their original character sheets 16-20 years later, and a couple have even named their children after them.

Now, I’m 39 years old and a loving father of 2 girls, and I still play those games on occasion. My passion has evolved into putting those ideas and amazing stories on paper for the whole world to enjoy. My first novel took me and co-author DC Fergerson 10 years to write and topped out at 180,000 words. Being too long and too complex, I finally ended the project and took its lessons to heart.

I learned that Dungeons & Dragons did not translate well into a novel. D&D made for great times, but also for some meandering plot lines, pointless encounters, and poor character motivations. No matter how memorable some of the moments were, if I wanted anyone to read my story, I needed to learn a lot more about writing.

I threw myself into being a full time student of novel crafting. I read every book on writing by Dwight Swain I could find. I paid Chuck Sambuchino (Editor for Writer’s Digest) to critique and edit my older work. I took James Patterson’s Masterclass, went to college, and joined online writing communities. All the while, I read my favorite fantasy novels again, only this time with a mental highlighter. I reworked my stories, outlined them, and decided to start from the beginning.

Many, many years later, I am in the final edit and proofreading stage of Dark Communion, the first installment of the Shadowalker Chronicles. My role as a father of two girls heavily influenced the characters I’d known for over 20 years, shaping them into women that my own daughters could respect. My characters took on a depth and quality that brings them off the page and into the minds of readers, because they have become all too real. I was privileged enough to work on two careers at the same time to accomplish this feat – a fun-loving and involved stay-at-home dad, and a full time writer.

Enter to win a $10 Amazon/BN GC – a Rafflecopter giveaway