A huge funeral for Windermere’s popular resident, Barbara Dodge, is taking place and florist Persimmon ‘Simmy’ Brown and her new assistant, Bonnie Lawson are busy compiling wreaths in preparation. There’s word of a series of sinister dognappings occurring in nearby Troutbeck and whilst taking a walk up Wansfell Pike, Simmy and her father, Russell, stumble on a dog, strangled to death – it’s not long before Simmy reluctantly finds herself caught up in a murder investigation…

Grab a copy of The Troutbeck Testimony on Amazon 🔗, Barnes & Noble 🔗, & Add it to your TBR list on Goodreads 🔗!

The first anniversary of Persimmon Brown’s opening of her florist shop in the Lake District had almost coincided with Easter and an explosion of spring flowers and blossom. Wordsworth’s daffodils performed to their greatest strength and pussy willow attracted hosts of honey bees who had failed to notice that they were meant to be in terminal decline. A month later, on the first long weekend in May, walking along a sheltered footpath to the west of Troutbeck, Simmy – officially Ms Persimmon Brown – could hear an energetic buzzing and murmured ‘something something something in the bee-loud glade’ to herself. Not Wordsworth, she was sure, but somebody like Yeats or Hardy. She would ask her young friend Ben, who knew everything.

The sun was warm on her shoulders; the light so clear that she could pick out numerous fast-growing lambs on the fells far above the village. Every weekend throughout the coming summer, she promised herself, she would get up at first light and go for an early walk. The anniversary had been a time for resolutions and one of them was to make much better use of the natural delights that surrounded her.

She felt an almost pagan euphoria at the burgeoning landscape, vibrant with flora and fauna at the start of another cycle of life. Her mother would say it was a mark in Christianity’s favour that it had been clever enough to superimpose all its biggest rituals onto far more ancient moments in the natural year, with Easter an obvious example.

There was now a bonus Spring Bank Holiday that Simmy was savouring with complete abandonment.

The late morning, with a sunny afternoon still ahead of her, brought feelings of richness and privilege that were almost shameful. But she had earned it, she reminded herself. The winter had been grey and protracted, interspersed with a number of unpleasant adventures. She had been repeatedly drawn into events that demonstrated the darker side of human behaviour, forced to confront far too much reality.

Now that spring had arrived with such a colourful crash, she was determined to shake all that off and concentrate on her flowers.

The plan for the day was to meet her father, Russell Straw, for a long-promised fellside walk after a modest lunch at the Mortal Man. The full walk, along Nanny Lane and up to the summit of Wansfell Pike – and back – was easily four miles in total, with some steep sections of stony path. ‘By rights, we should go across to the Troutbeck Tongue at the same time, but that’s rather ambitious,’ Russell conceded.

‘I shall want some fortification first,’ Simmy had warned him. ‘And if there’s the slightest risk of rain, I’m cancelling the whole idea. Neither of us is fit enough to do anything rash.’

There was no suggestion of rain, the sky a uniform blue in every direction. It was, in fact, the most perfect day for very many months and Simmy was duly thankful for it. Her father would bring water, map, and dog. She would provide a camera, mobile phone and two slabs of Kendal mint cake.

The fells above Troutbeck were stark, dramatic and uncaring. There were barely any flowers or trees adorning them, other than the tiny resilient blooms that crouched underfoot. More than happy to accommodate her father’s wishes, Simmy nonetheless preferred the softer and more moderated lower levels.

This explained her morning stroll, taking a zigzag route from her house to the hostelry along lanes that had been colonised by humanity, with gardens and houses taking their place in the picture. The bees at least agreed with her. Azaleas and rhododendrons were in bud, reminding her of her startled surprise at the vibrant colours, the year before. Not just the natural purples and pinks, but  brilliant orange, deepest crimson and a wide array of other hues shouted from gardens all over the relatively balmy area around Windermere and Ambleside. Even the wilder reaches of Coniston boasted spectacular displays. Aware that it might be foolish to expend energy on this pre-walk stroll, she nonetheless felt the need to exploit the sunshine and the flamboyant floral displays. It was semi-professional, too – she ought to be apprised of the full range of seasonal blossoms in gardens, in order to echo and embellish them in the offerings she stocked at the shop. Flowers were her business, and any lateral information she could acquire would always come in useful.

Her father was waiting for her at the pub, sitting at an outside table on a lower level, with his dog. She kissed the man and patted the animal. ‘Is he going to cope with such a long walk?’ she wondered. It was a rather ancient Lakeland terrier, officially named Bertie, but mostly just called ‘the dog’. His forebears had failed a purity test, it seemed, and poor Bertie had found himself rejected as breeding stock and consigned to a rescue centre until eventually rescued by kindly Russell Straw.

‘When did you last take him on a jaunt like this?’

‘About eighteen months ago. We’ve been waiting all this time for you.’

‘Dad! That’s ridiculous.’ In spite of herself, she laughed. ‘Poor old chap. He won’t know what’s hit him. His feet will be sore for weeks.’

‘Not a bit of it. He spends all his time digging up stones. His feet are as tough as iron. He could easily outwalk both of us. Now let’s get on with it. I want to set off by one at the latest.’

That gave them forty-five minutes to eat a hearty pub lunch with beer to wash it down. ‘We shouldn’t walk on full stomachs,’ Simmy remarked. ‘We’ll get a stitch.’

‘Better than trying to do it empty. We need the food to give us stamina.’

‘At least we’ve got the weather for it. And listen to those birds!’ A pair of collared doves cooed at them from an overhead wire, the gentle three-note song a backdrop that Simmy always loved, despite the blatant lack of musical variety. Her habit of feeding garden birds had attracted another pair of doves to her own little patch, a few hundred yards from the pub, and she had grown used to waking to their call, imagining that they were deliberately asking her for some breakfast.

Russell cocked his head. ‘They’re not native, you know. They’re quite recent immigrants. I mean recent. I was about ten years old when the first ones settled here. The BBC put them in a medieval radio play by mistake not long ago. Lots of people wrote in about it.’

‘I agree with you. I also like grey squirrels, even if I get lynched for saying so.’

She laughed again, after a wary glance around. In Troutbeck, the red squirrel was verging on the sacred and the grey accordingly considered devilish. Anyone overhearing Russell was liable to take exception to his views. But nobody at the neighbouring tables was reacting. Nothing could sully her delight at the carefree afternoon ahead with the best of all possible fathers. It took a lot to disturb Russell Straw – but then a lot had happened in recent times, and his daughter had certainly caused him some worry over the winter. His wife was the powerful half in the marriage, leaving him to contented pottering and sporadic researches into local history. They ran a somewhat eccentric bed-and-breakfast business in Windermere, in which Angie Straw broke a lot of rules and earned a lot of profound gratitude in the process. Her reviews on TripAdvisor veered from the horrified to the euphoric, depending on how much individuality her guests could stomach. She was a capricious mixture of old fashioned and hippy, refusing to use guests’ first names unless they insisted, and cheerfully producing full breakfasts at ten-thirty, if that’s what people wanted.

‘Let me just pop to the lav and then we can be off,’ Russell said. ‘Mind the dog, will you?’

She took the lead attached to Bertie and nodded.

The sun was as high as it was going to get, and the afternoon stretched ahead of them with no sense of urgency. The sky remained an unbroken blue.

The views from the summit of Wansfell Pike would be spectacular. At least two lakes would be visible, and any number of fells on all sides. Russell knew the names of most of the main landmarks, and had a map with which to identify others. Simmy had only a rudimentary and theoretical knowledge of any of it.

Bertie whined and pulled annoyingly. ‘He’ll be back in a minute,’ Simmy told him. ‘Don’t be silly.’ Dogs were generally annoying, to her way of thinking. So dreadfully dependent and needy all the time.  It had come as a surprise when her parents rescued this little specimen, and even more so when Russell developed such a fondness for it. To Simmy’s eyes, the animal lacked character, which Russell insisted was a consequence of his harsh life, full of betrayal and confusion. ‘He just wants  everything nice and peaceful from here on,’ he said.

Which was generally what he got, apart from a never-ending procession of B&B guests, who mostly patted his head and then left him alone.

‘You were a long time,’ she told him, when her father eventually returned.

‘I know.’ He was frowning distractedly. ‘I overheard something, outside the gents, and I have no idea what to make of it. I kept out of sight for a minute, just in case they didn’t like the idea of anyone hearing them.’

‘Two men talking. It sounds a bit wild, I know, but I think they were planning a burglary.’

Rebecca Tope is the author of four murder mystery series, featuring Den Cooper, Devon police detective, Drew Slocombe, Undertaker; Thea Osborne, house sitter in the Cotswolds and now Persimmon Brown, Lake District florist. She is also a “ghost writer” of the novels based on the ITV series Rosemary and Thyme.

Catch Up with Ms. Tope on rebeccatope.com 🔗 or on twitter at @RebeccaTope 🔗.

Don’t Miss Out On Your Chance to WIN!

This is a rafflecopter giveaway hosted by Partners In Crime Virtual Book Tours for Rebecca Tope & Harper Collins – Witness/Impulse. There will be 3 US winners of one (1) eBook copy of The Troutbeck Testimony by Rebecca Tope.  This is subject to change without notification. The giveaway begins on October 22nd and runs through November 25th, 2016. 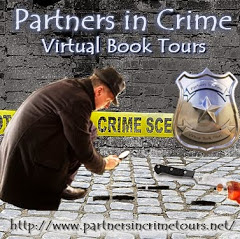